Ed Sheeran is truly regarded as one of the best singers in the 21st century. His story and his life is full of highlights, but at the same time he always thought about himself as an ordinary boy. Nevertheless, he has so much talent and inspiration, and his perfect songs are yet to come. // Эд Ширан действительно считается одним из лучших певцов 21 века. Его история и его жизнь полны ярких моментов, но в то же время он всегда считал себя обычным мальчиком. Тем не менее, у него так много таланта и вдохновения, а его идеальные песни еще впереди.

Sheeran’s debut album, + (pronounced “plus”), was released in September 2011 and topped the UK Albums Chart. It contained his first hit single “The A Team“. In 2012, Sheeran won the Brit Awards for Best British Male Solo Artist and British Breakthrough Act. Sheeran’s second studio album, × (pronounced “multiply”), was released in June 2014. It was named the second-best-selling album worldwide of 2015. In the same year, × won Album of the Year at the 2015 Brit Awards, and he received the Ivor Novello Award for Songwriter of the Year from the British Academy of Songwriters, Composers and Authors. A single from ×, “Thinking Out Loud“, earned him the 2016 Grammy Awards for Song of the Year and Best Pop Solo Performance.

Sheeran’s third album, ÷ (pronounced “divide”), was released in March 2017, and was the best-selling album worldwide of 2017. The first two singles from the album, “Shape of You” and “Castle on the Hill“, broke records in a number of countries by debuting in the top two positions of the charts. He also became the first artist to have two songs debut in the US top 10 in the same week. By March 2017, Sheeran had accumulated ten top 10 singles from ÷ on the UK Singles Chart, breaking the record for most top 10 UK singles from one album. His fourth single from ÷, “Perfect“, reached number one in the US, Australia and the UK, where it became the Christmas number one in 2017. The world’s best-selling artist of 2017, he was named the Global Recording Artist of the Year. Released in 2019, his fourth studio album No.6 Collaborations Project debuted at number one in most major markets, and spawned three UK number one singles, “I Don’t Care“, “Beautiful People” and “Take Me Back to London“.

Sheeran has sold more than 150 million records worldwide, making him one of the world’s best-selling music artists.[6] He has 84.5 million RIAA-certified units in the US,[7] and two of his albums are in the list of the best-selling albums in UK chart history: × at number 20, and ÷ at number 34. In December 2019, the Official Charts Company named him artist of the decade, with the most combined success in the UK album and singles charts in the 2010s.[8] Globally, Spotify named him the second most streamed artist of the decade.[8] Beginning in March 2017, his ÷ Tour became the highest-grossing of all time in August 2019. An alumnus of the National Youth Theatre in London, Sheeran’s acting roles include appearing in the 2019 film Yesterday.

Framlingham Castle in Sheeran’s home town. The castle and his upbringing in Framlingham is the subject of his 2017 single “Castle on the Hill“.[9]

Edward Christopher Sheeran was born in Halifax, West Yorkshire, England on 17 February 1991.[3][10] His early childhood home was on Birchcliffe Road in nearby Hebden Bridge.[11] His father was a curator at Cartwright Hall in Bradford and his mother worked at Manchester City Art Gallery.[11] In December 1995 he moved with his family from Hebden Bridge to Framlingham in Suffolk.[12][13] He has an older brother named Matthew, who works as a composer.[14] Sheeran’s parents, John and Imogen, are from London. His paternal grandparents are Irish,[15][16][17] and Sheeran has stated that his father is from a “very large” Catholic family.[18] John is an art curator and lecturer, and Imogen is a culture publicist turned jewellery designer.[16][19] His parents ran Sheeran Lock, an independent art consultancy, from 1990 to 2010.[20]

Sheeran sang at a local church choir at the age of four, learned how to play the guitar at age eleven,[21] and began writing songs while at Thomas Mills High School in Framlingham.[22][23] A 2004 school report described him as a “natural performer”, and his classmates also voted him “most likely to be famous”.[24] He was accepted at the National Youth Theatre in London as a teenager.[25][26] He successfully auditioned for Youth Music Theatre UK in 2007 and joined their production of Frankenstein in Plymouth.[27] He is a patron of Youth Music Theatre UK (now renamed British Youth Music Theatre)[28] and of Access to Music, where he studied Artist Development.[29][30] Sheeran is a second cousin of Northern Irish broadcaster Gordon Burns,[31] who hosted the British game show The Krypton Factor.[16] 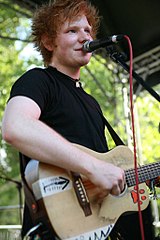 Sheeran performing at the Ipswich Arts Festival in July 2010

Sheeran began recording music in 2004 and independently released his first collection of work Spinning Man.[A] He has been friends with fellow English singer, Passenger, since he was 15, with the two playing the same gig in Cambridge.[33] He moved to London in 2008 and began playing in small venues. In 2008, he auditioned for the ITV series Britannia High.[34] He also opened for Nizlopi in Norwich in April 2008, after being one of their guitar technicians.[23] In the autumn of 2009, Sheeran began studying music at the Academy of Contemporary Music (ACM) in Guildford, Surrey as an undergraduate at the age 18,[35] but left without permission in the same year to support hip-hop artist Just Jack.[36] He released another EP in 2009, You Need Me, and also collaborated several times with Essex singer Leddra Chapman, including CeeLo Green‘s “Fuck You“. In February 2010, Sheeran posted a video through SB.TV, and rapper Example invited Sheeran to tour with him. In the same month, he also released his critically acclaimed Loose Change EP, which featured his future debut single, “The A Team“.[37]

Sheeran began to be seen by more people over the internet through YouTube and his fan base expanded, with him also receiving praise from The Independent newspaper and Elton John.[38] He played a Station Session in St. Pancras International in June 2010.[39][40] The episode is unavailable from the official Station Sessions channel.[41] Sheeran also self-released two other EPs in 2010, Ed Sheeran: Live at the Bedford and Songs I Wrote with Amy, which is a collection of love songs he wrote in Wales with Amy Wadge.[42] When in Los Angeles in 2010, he was invited to perform at The Foxxhole, a club run by actor Jamie Foxx, which ended with an invitation to stay at Foxx’s home.[43]

On 8 January 2011, Sheeran released another independent EP, No. 5 Collaborations Project, featuring grime artists such as Wiley, Jme, Devlin, Sway and Ghetts.[44] With this EP, Sheeran gained mainstream attention for having reached number 2 in the iTunes chart without any promotion or label, selling over 7,000 copies in the first week.[45] Three months later, Sheeran put on a free show to fans at the Barfly in Camden Town. Over 1,000 fans turned up, so Sheeran played four different shows to ensure everyone saw a gig, including a gig outside on the street after the venue had closed. Later that month, Sheeran was signed to Asylum Records.[45]

On 26 April 2011, Sheeran appeared on the TV music show Later… with Jools Holland, where he performed his debut single “The A Team”. Six weeks later, “The A Team” was released as a digital download in the UK. The release served as the lead single from Sheeran’s debut studio album, + (pronounced “plus”).[46] “The A Team” entered the UK Singles Chart at number three, selling over 58,000 copies in the first week. It was the best-selling debut single and the overall eighth-best selling single of 2011, selling 801,000 copies.[47] The lead single also became a top ten hit in Australia, Germany, Ireland, Japan, Luxembourg, New Zealand, Norway and the Netherlands. During a headline set in the BBC Introducing tent at Glastonbury Festival 2011, Sheeran announced that “You Need Me, I Don’t Need You” would be released on 26 August as the second single from the album. The second single peaked at number four on the UK Singles Chart.[48] “Lego House” was released as the third single, reaching the top ten on the Australian, Irish and New Zealand Singles Charts.[49] The music video for “Lego House” features actor Rupert Grint, as a play on their similar appearance.[50] “Drunk“, released on 19 February 2012, became Sheeran’s fourth consecutive top ten single in the UK, peaking at number nine.[51] 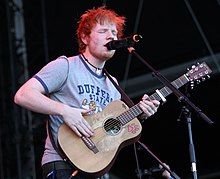 Sheeran at the Frequency Festival in Austria, August 2012

The song, “Moments“, on the debut album by boy band One Direction, released in November 2011, was co-written by Sheeran.[60] At the 2012 Brit Awards on 21 February, Sheeran won the Brit Awards for Best British Male Solo Artist, and British Breakthrough Act of the Year.[61][62] On 10 January 2012, it was announced that Sheeran would support Snow Patrol on their US tour from late March until May.[63] His song, “Give Me Love“, was featured in the episode “Dangerous Liaisons” of The Vampire Diaries.[64] At the Ivor Novello Awards in May 2012, Sheeran’s “The A Team” bested Adele‘s “Rolling in the Deep” and Florence and the Machine‘s “Shake It Out” for Best Song Musically and Lyrically.[65] Sheeran performed “The A Team” at the Diamond Jubilee of Queen Elizabeth II concert held on The Mall outside Buckingham Palace on 4 June 2012 and a cover of Pink Floyd‘s “Wish You Were Here” at the closing ceremony of the 2012 Summer Olympics in London on 12 August 2012.[66]

Taylor Swift contacted Sheeran after hearing his music while touring Australia in March 2012.[67] He later co-wrote and provided vocals for “Everything Has Changed“, a single featured on Swift’s fourth studio album, Red. Sheeran also contributed two songs to One Direction’s second studio album, Take Me Home, released in November 2012; the single “Little Things” became the group’s second number-one in the UK.[68] Sheeran’s album peaked at No. 5 on the Billboard 200, while “The A Team” reached No. 16 on the US Billboard Hot 100.[67] In late 2012 and early 2013, he headlined a US tour of 6,000–9,000 capacity venues.[67] “The A Team” received a nomination for Song of the Year at the 2013 Grammy Awards.[69] Elton John, who runs Sheeran’s management company, canvassed the award organisers to get Sheeran a performance slot at the ceremony but was told that Sheeran alone was not high-profile enough. John decided to appear with Sheeran to circumvent this problem.[70] Sheeran was also featured on some tracks from Irish singer Foy Vance‘s fourth album Joy of Nothing.[71]

From March to September 2013, Sheeran played at arenas and stadiums across North America as the opening act for Swift’s The Red Tour.[72][73] According to Sheeran, it was then his biggest tour, and he added a scarlet RED tattoo to commemorate it.[74] In October 2013, Sheeran headlined three sold-out shows at New York’s Madison Square Garden.[73][75]<sup id="cite_ref-77" class="refere